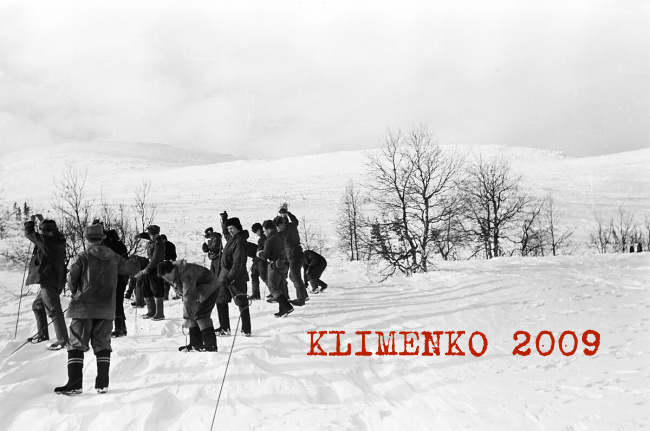 NAVIG: Hello, did you serve together with Hamza Fazylovich Syunikaev?

NAVIG: He told us that you were with him in 1959 in search of the Dyatlov group.

NAVIG: We are investigating the death of the Dyatlov group. We want you ask you about what happened there.

VNK: And what what are you interested in? About the search?

NAVIG: Yes, about what you were doing there during search. It seems there was a cannonade, there were explosions, how many people were there... who was the commander?

VNK: There was a captain, but I don't remember now.

NAVIG: Chernyshev? And besides you, were there students?

VNK: There were soldiers and students.

NAVIG: And Hamza Fazylovich says that you were alone there.

NAVIG: At the 50 year anniversary we met with V.G. Karelin and he said that he was there.

VNK: Yes, there were students, there was one comrade taking pictures of us all.

NAVIG: Was he a student?

VNK: Yes, yes... and we gave him an address, he said he would develop pictures and send them. But he never did.

NAVIG: Who was he? You remember his name?

VNK: I don't remember, so many years have passed...

NAVIG: And what were you looking for there (on the mountain - ed.)?

VNK: We were searching for the students.

NAVIG: Right. Were there any specific assignments?

VNK: We were 20 people and the same number of students, and that's from the place where they come from...

VNK: Yes. And from here we started the search. The probes were about 3 meters (10 ft) long and we lined up abreast and went down.

NAVIG: You were somewhere in the middle of March?

NAVIG: Did you go to the valley of the 4th tributary?

VNK: Yes, we reached the ravine, where the cedar stood.

NAVIG: Did you go into the ravine? Where the bodies were found...

VNK: No. They were other people. They had already replaced us, we were there for a month, then other comrades arrived.

NAVIG: Where did you stay? Hamza Fazylovich doesn't remember where your tent was. On Auspiya river or where the cedar was?

NAVIG: So you then climbed the pass.

NAVIG: Can you show it on the map?

NAVIG: You didn't setup the tent at the new place, have you? When you arrived it was already there?

VNK: Probably it was, we slept there in sleeping bags, we had a walkie-talkies.

NAVIG: Hamza Fazylovich says that there was a cannonade there, some kind of shelling.

VNK: What cannonade... We always had a duty officer at night. And the attendant woke us up at night. We got up and that's where the students' tent was, there were two mountain peaks.

VNK: they were far away. And from one of the summits a glowing sphere flew out of it, then started spinning and flying to the other summit.

VNK: Yes, it was a fireball and there was silence, and then when it went up and reached the summit sparks went off and there was a roar. Not a cannonade, but a rumble like explosion...

NAVIG: Was there just one fireball?

VNK: Only one and there was nothing else.

NAVIG: And then you sent a radiogram through the radio operator? Was Hamza Fazylovich a senior?

VNK: We had a senior captain. He was from the educational part. Rather, there was a regimental school, we were there with a captain from the regimental school. And he was in charge when we arrived there by helicopter. Then the students arrived. So he was the eldest among us and the students.

NAVIG: Did you have any restrictions not to go there or there?

VNK: In my opinion, we ourselves did not go anywhere. If you poke with probes all day, and the snow was deep up to 2 meters, you need to make 5 pokes per meter, 5 per meter. The whole day we rummage around until it's time to go down into the tent - we didn't feel our hands or feet, so we did not go anywhere.

NAVIG: Was the snow dense? Did you fall through?

NAVIG: Was the student tent still with you or was it already dismanteled?

NAVIG: Were there any traces left?

NAVIG: The reports say they were found in the forest zone.

NAVIG: Did you see the footprints left in the snow by the hikers?

VNK: Everything was already trampled down, there was nothing left.

NAVIG: And how was the snow in the forest?

VNK: It was hard.

VNK: Yes we went to the Cedar.

NAVIG: And the snow was hard?

VNK: The cedar still had branches covered with snow and lowered to the ground.

NAVIG: Was the dead wood visible there?

VNK: I don't remember. In my opinion, at the cedar there must have been something with which they made the fire.

NAVIG: They used what they broke and collected themselves, but was there dead wood on the ground?

NAVIG: We believe that there was an accident at a military facility or these fireballs...

VNK: Nothing was natural there.

End of the first part.

NAVIG: Victor Nikolaevich, this is again from Novosibirsk.

NAVIG: Anything come to mind?

NAVIG: Then we have clarifying questions, especially about where the tent (of the hikers) was, how many degrees do you think the angle of the slope was?

VNK: 50 years have passed, I don't remember. But when we went down for the first time, we sat down and slid down, although with no great success...

NAVIG: Didn't you have skis?

VNK: No, we were wearing boots.

NAVIG: How about the "fireballs".

VNK: That year, in my opinion, there were elections, if I remember correctly. I went to the second search party. The first shift went in March, and part of April. We went in April and part of May. When we arrived we were taking exams at the sergeant school.

NAVIG: And Hamza Fazylovich was with you?

VNK: He may have been in the first shift.

NAVIG: He was in the middle of March...

NAVIG: So were you with him or not?

VNK: I was with Zauzin.

NAVIG: Did you go there twice?

VNK: I was just once in the second shift. I studied with studied Yuri Zauzin Yuri, from Malyi Yaroslavl. But now I don't know whether he is alive or not... Syunikaev must have been in the first shift.

NAVIG: April is already late, all the hikers were found there. You were not there?

VNK: No. We were searching in the area where the students' tent was, and then we walked on the right side of the mountain.

NAVIG: On the right side when you stand with your back on a mountain or face?

VNK: From our tent facing the student tent. The tent was to the left and we were to the right. Where there was a ridge of stones and we started our search from these stone ridges. But I don’t remember why we didn’t go straight to the cedar. There was not one cedar, but many, and they remained to our left hand side. But they were not far away.

NAVIG: They were on your left?

VNK: Yes, there were cedars. And we took it to the right, for some reason we probed this area...

NAVIG: About the fireballs... were they far away?

VNK: Our tent was here facing the student's tent, and there are two peaks and at night the person on duty woke us up... hurry up look!

NAVIG: You saw it yourself?

NAVIG: So the ball went up and then went down?

VNK: When we got out, it was in the middle between the peaks. When it hit sparks flew out and hum, such a dull hum and a prolonged hum and then everything stopped.

NAVIG: The fire went out?

NAVIG: And what were the dimensions of the ball? Compared to the sun, the moon.

NAVIG: Where was the duty officer? Outside?

VNK: He was in the tent.

NAVIG: How did he know about the fireball?

VNK: I went out for a relief, looked up, and the ball was there.

NAVIG: There was only one fireball, there were no more?

VNK: Yes, and there was nothing else at all.

NAVIG: And there was only one platoon in your training?

NAVIG: And why did you end up in different groups with Hamza Fazylovich?

VNK: They recruited those who wanted to go in the company and I did not get into the first shift.

NAVIG: Were the soldiers Russians?

NAVIG: I have a photo where non-Russians are photographed. I'll send you for identification.

NAVIG: All right then, goodbye for now. Thanks for the information.